What Happened on the October SAT?

Third times the charm? Students report issues with SAT for the third time in a row.

As scores from the October SAT are being released, reports of students getting fewer questions wrong than in a past SAT, yet getting scores that were the same or even lower. Before we discuss what happened in the October test, let’s review the past two tests and their respective controversies.

What happened to the August SAT? This time there was not an issue with the scoring scale, but an issue concerning test security. The US administration of the August SAT was given internationally the previous year. In the pre-smartphone days, this would not have been an issue. Nowadays though, minutes after a test is administered there are already students discussing questions online, and shady test-prep schools recreate the tests to give to their students to practice with. Since there the August SAT is not given internationally, many of the students who flew to the US to take the test may have seen that test before.

In June, students also reported getting more questions correct, yet getting a lower score than on their past tests. In particular, the math section had a very unforgiving scale; for example, missing 3 questions would get a student a 720, but missing 3 questions on the August SAT would result in a 780, a 60 point difference. CollegeBoard tries to scale each SAT so that there is no benefit or penalty for taking an “easy” or “hard” test. Theoretically, if the same student took the test in August or October or March they should receive the exact same score, even if one test was “easier” than the others. To adjust the scale, CollegeBoard reportedly gives a small number of students an experimental test, and a much larger proportion experimental questions in lieu of taking the essay. Using these results, a scale is created to match the new test up with previous tests. However, occasionally once a test is given, CollegeBoard realizes the test was significantly harder/easier than expected, and thus “adjusts” the scale accordingly.  This resulted in the scale for the June SAT harshly penalizing those who only missed a few questions. There was such uproar once the scores came out that CollegeBoard had to post an FAQ to try to reassure students that this situation was normal.

By early reports from students, the scale on the October SAT was much harsher than that of August’s, closer to the debacle in June. While the June test penalized students severely for any mistakes they made on the math section, October’s test appears to have the same issue with being easier than anticipated, but for the reading and writing sections. One student reported despite getting 9 more questions correct in October compared to August, they saw a 10-point decrease in their score. 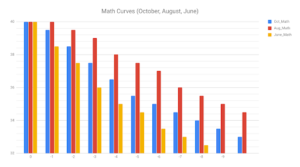 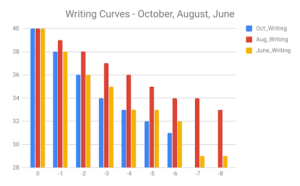 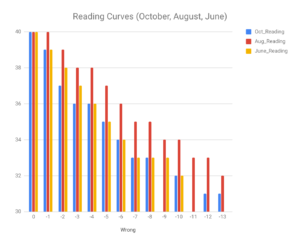 Graphs showing the scale scores (out of 40) for each section of the SAT for the October, August, and June administrations. (Note: Since CollegeBoard does not release the scales for every test, most of this data is self-reported by students)

With three administrations of the SAT with major issues, it remains to be seen whether this will have any impact on students choosing between the SAT and ACT. After clawing back its position as the most popular college admission test from ACT, CollegeBoard has been sending out surveys to test-takers asking them whether they found the SAT or ACT to be an easier test. If the goal is to make the SAT easier and more appealing to students than the ACT, CollegeBoard is risking more incidents like that of June and October.

END_OF_DOCUMENT_TOKEN_TO_BE_REPLACED

Written by: Christopher Hamilton In a recent announcement, MIT...