This year, the number of students taking the ACT has continued to decline. After reaching a high of almost 2.1 million students in 2016, the ACT has continued to drop in popularity as CollegeBoard has convinced more states to adopt the revised SAT. One interesting statistic from the just-released data from ACT about the class of 2018, however, is that even though the total number of students taking the test has declined by 5%, the number of students achieving the top score of 36 has increased by 35%! In fact, the number of perfect scores has risen dramatically in the past decade. There were 9 times as many students in 2018 who received a score of 36 compared to 2008 and 53 times as many perfect 36s compared to 1998.

25 Hamilton students from our 2018 Summer Program have reported a perfect 36 score. 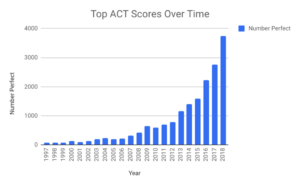 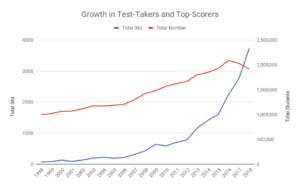 The growth of students earning a 36 on the ACT has far outpaced the increase in overall testing population.

If we dig a little deeper into the numbers, the increase in 36s does not appear to be driven by students doing better on all sections of the ACT.

In fact, we see the biggest increase in perfect section scores has come from the English section. Math scores have dipped slightly, while Reading and Science have remained almost flat.

Why the dramatic increase in the English score? One explanation comes from the format of the writing section on the new SAT, which was introduced in 2016.

As we can see, the structures of the sections are extremely similar. A student studying for the SAT has to make almost no changes content-wise to prepare for the ACT English section of the test.

Has the ACT gotten easier?

The ACT has not undergone a significant revision since 1989. Because the ACT is a test of how much students have learned, the test has evolved with changing content standards in high schools. ACT made minor changes to how scores were reported in 2015 and has tweaked question types and passage structures in the meantime. None of these minor recent changes have made the test easier. If we look at the average composite score over the past decade, there has been almost no change – if anything, the average has dipped slightly. 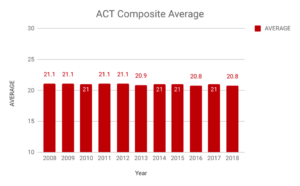 If the ACT has not gotten easier, than why are there so many more top scores? The answer may lie in exactly who is driving the increase in ACT test-takers. The ACT was, and to some extent still is, the dominant test in the Midwest and South, with the SAT being the preferred test for students living along the coasts. An increasing number of students have been taking both tests, especially now that the revised SAT is so similar to the ACT. Many of the students who take both tests are applying to the most competitive schools and are looking to achieve a top score. 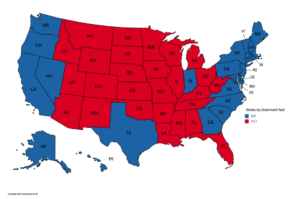 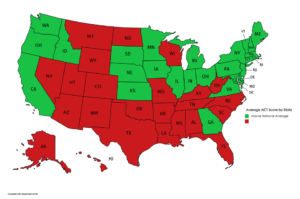 If we take a look at where the SAT is most popular, we notice a significant number of those states also have higher-than-average ACT scores.

Is the ACT going to get harder?

According to Katie Wacker, ACT’s Public Relations Associate, “one-tenth of 1%” of students are expected to get a score of 36. In recent years, students have blown past the number, which would seem to indicate that ACT will need to make some changes. In fact, ACT has made some changes in the past few years that students have interpreted as intending to make the test more difficult, though ACT claims the changes are to make the test better align with current state curriculum standards. The most significant changes have been including more advanced math concepts as well as requiring more outside knowledge for the Science test. Scores have continued to climb at the higher end of the scale, so it unclear whether the test is actually becoming more difficult.

Has the SAT seen the same increase?

The short answer is, we don’t know. SAT has not released any of data on how many students achieved which scores since the new SAT was introduced in 2016, though they have suggested the distribution has stayed roughly similar to that of the old SAT. Based on data from 2015, the last year the old SAT was given, we would expect roughly 0.02% of students to get a perfect 1600, or roughly one-tenth the number of students who get a perfect ACT score. Why the difference? Well, it may have something to do with how the tests are scored. The overall SAT score is calculated by taking the sum of the Reading/Writing and the Math section scores. That means that a student who is aiming to get a perfect 1600 needs a perfect 800 in both Reading/Writing and Math. The composite ACT score is computed by taking the average of the four section scores. So it is possible to get a 36 composite score without getting a 36 in every section. For example, a student with scores of 36 English, 35 Math, 36 Reading, 35 Science will have an average score of 35.5, which ACT will round up to a 36. ACT refers to a 36 as the “top” score rather than “perfect” score because it is possible to achieve a 36 while not being perfect in every section.

So does that mean that a 1590 will keep you out of a dream school but a 36 will guarantee admission? Absolutely not. Any score in the top 1% (1510 or higher for the SAT and 34 or higher for the ACT) is impressive and treated much the same. While it doesn’t hurt to take both tests, remember that your college admission application is more than your score on the SAT or ACT.

← David Lord What Happened on the October SAT? →

END_OF_DOCUMENT_TOKEN_TO_BE_REPLACED

Written by: Christopher Hamilton In a recent announcement, MIT...