Why enroll in H3?

In light of significant changes to the SAT in 2016 — changes that aligned the SAT with the Common Core and that made the SAT nearly 95% concordant with the ACT — we developed a new concept in test prep: H3. Offered only at Hamilton Education, H3 classes take advantage of the similarities among the SAT, ACT, and PSAT, allowing students to master the skills necessary to succeed on all three tests in a single summer or fall course.

Often, simply looking at the test or even a diagnostic test is not enough to determine which test a student will perform better on. In fact, we’ve had dozens of students who were initially against taking–or studying for–the ACT go on to earn perfect scores on that test. Furthermore, students who know they prefer the ACT will still take the PSAT in the fall of their 11th-grade year, and this test could lead to significant financial aid for college.

Nearly every college accepts both the ACT and the SAT, which suggests that, according to college admissions officers at least, there is no substantive difference between the difficulty level of each test.

Because of this unique approach, 164 Hamilton students have earned perfect SAT or ACT scores in the past few years, including 39 perfect ACT scores in 2019. A perfect ACT is obtained by only one-tenth of 1% of test-takers across the country. More than 250 Hamilton students scored in the top 1% on either the SAT or ACT, and the vast majority of summer students made significant gains, taking a vital step toward admission to the college of their choice. No other company – in the nation or in the world – has achieved anything like these results in the last year.

And because the H3 program prepares students for all three tests, even our students who found the ACT a better fit did well on the PSAT, the determining factor of the National Merit program. For middle-class students, the National Merit Scholarship (NMSQT) is often the only way to earn money for college. Last year, Hamilton students were offered more than $3 million in merit-based aid, largely because of their strong PSAT scores.

As always, we have dozens of different options for summer test prep and enrichment, ranging from daily, weekday-morning classes to once-a-week Saturday classes. Each class has different levels to make sure students get what they need from their class. All fulfill the same purpose: to not only develop students’ skills in subject areas that will complement Common Core and AP classes, but also give students the best opportunity to earn scores consistent with Ivy and top-UC admissions.

If you are unable to join us in summer, we offer many other test prep options. 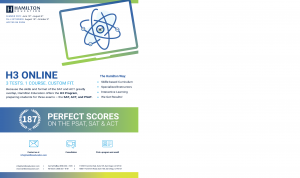 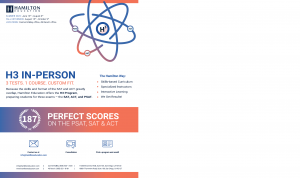 Due to the COVID-19 pandemic, we hold all of our consultations, classes and tutoring sessions online via Zoom. Thereby, we are able to provide assistance to students wherever they may be.

Classes are taught by experienced instructors, many of whom not only have graduate degrees, but also have extensive experience in teaching at the college level, making them uniquely qualified to implement our skills-based approach. Students leave our classrooms enriched not with tricks or shortcuts, but instead with better reading, writing, and math skills, contributing to better overall academic performance and engagement.

“The tutors are very good at teaching and explaining the materials. My kid improved 200 in SAT score and 5 in ACT score. I highly recommend it!”

“The SAT/ACT H30 Boot Camp was the best investment we made to help our daughter get ready for her upcoming SAT. The results speak for themselves, she improved her score by over 30% in just 8 weeks.”

“I can’t believe the amount of improvement I saw in my test scores! It was perhaps one of the most enlightening programs I’ve ever been a part of.”

“I learned a lot this summer, not only for the SAT and ACT but also for general educational topics as well. ”

“I can definitely say that I really got more motivated to study and see my results when I put the hard work in versus when I don’t and I was really proud of myself by the end that I could really improve when I put my mind to it. I really enjoyed the teacher’s love and dedication to what they do!”

“Thank you for the gift of your service! You have a fantastic program!”

“Thank you so much for helping me and other students on the test! I would definitely recommend this program to others in need, and I thank all the teachers who made the experience fun and exciting! Thank you so much!!!!!”

“The Hamilton Bootcamp program is incredibly well designed and features some amazing teachers.

This Hamilton Zoom Camp helped me to realize that I can be better at anything as long as I try and do my best. It empowered and motivated me to thrive even through difficult times. It was an enjoyable experience that has been a part of my path to success.”

“Every Hamilton program provides learning experiences focused on boosting your test scores in a fun and engaging way.”

“Hamilton really helped me stay disciplined and maintain a goal of getting a higher score.  My score improved significantly through this program.”

“I really enjoyed how encouraging the teachers were!”

It All Starts with a Consultation

Because classes at Hamilton are not “one-size-fits-all,” we request that students and families interested in our courses or services schedule a complimentary 45-minute initial counseling session. There is no charge for this session, and absolutely no pressure to sign up for classes or services.

The initial counseling appointment lets us meet students and learn about their individual academic lives and learning styles. It also helps all of us – students, parents, and Hamilton Education – begin long-term planning to help students reach their goals.